We've sent you an email with a link to update your password.

We will send you an email to reset your password.

What is the difference between keyboard switches?

If the PCB makes up the brain of your mechanical keyboard, its switches make up its soul. It’s that feeling you get when you start typing on your keeb, and everything just... clicks. Or clacks. Or bumps.
What follows is a rundown of clicky, tactile, and linear switches, as well as a mechanical switch’s parts, related tools, and flavors. An introduction to optical switches has also been included.

Note: This primer/guide will not cover modding switches.

Optical switches, similar to mechanical switches in exterior but functionally different from them, utilize light to register keystrokes.

Mechanical switches can be sorted into three categories: clicky, tactile, and linear. The categorizations are based on the auditory and tactile feedback the user experiences when the switch is pressed.

Mechanical switches are generally composed of the same parts, give or take a few pieces. That’s not to say that all switches are the same -- switch manufacturers often add tweaks to the base template to create their own unique switch flavors. Note that the generalizations below are based on Cherry MX mechanical switches. 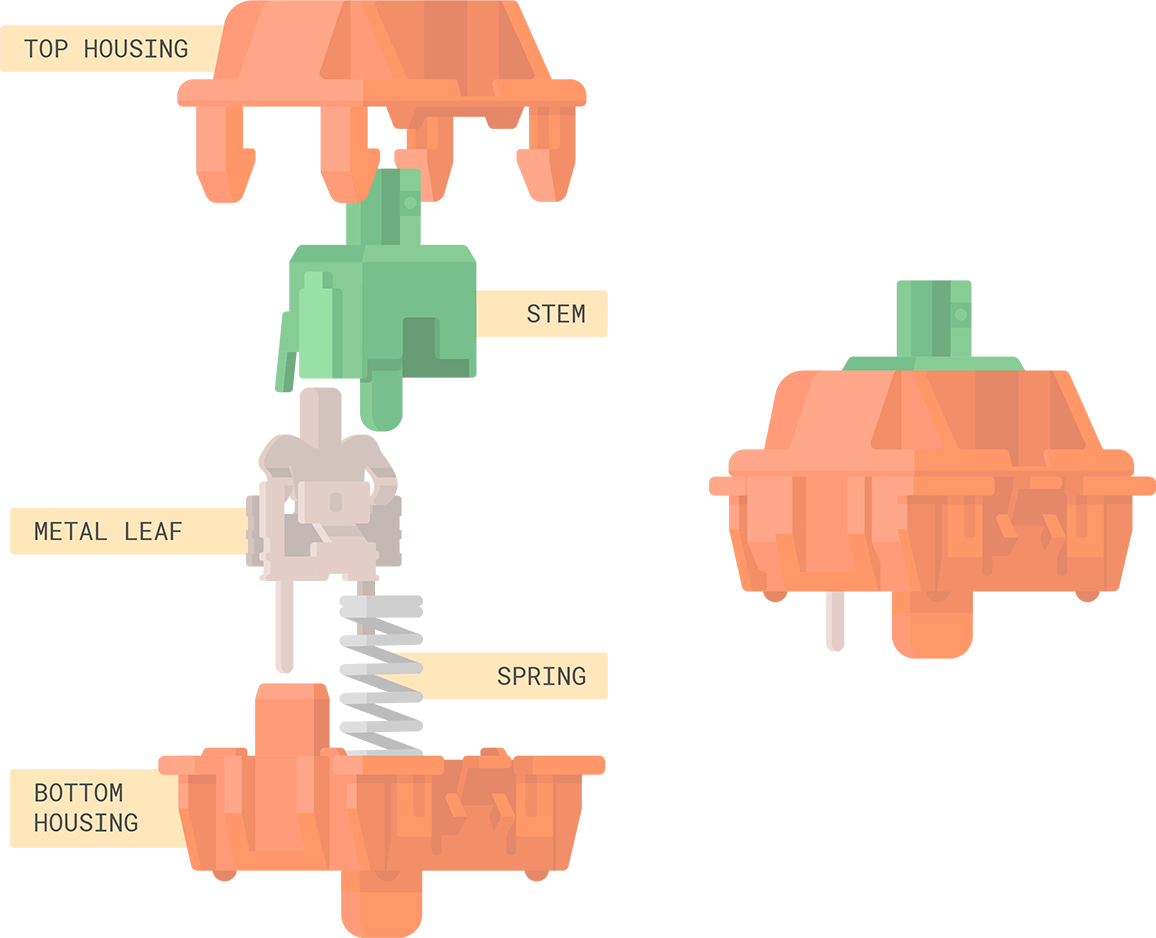 The housing is made up of an upper housing and a bottom housing. Together, they form the plastic cuboid enclosure that keeps the switch’s parts contained. While it serves a protective purpose, offering some basic physical shock-, water- and dust-resistance for its internals, it also works in tandem with the switch’s spring to provide a consistent and comfortable typing experience.

The leaf consists of two metal contacts that sit in the bottom housing. At rest, the contacts do not touch one another. When the key is pressed, the contacts touch, an electrical circuit is completed, and a keystroke is registered.

The stem determines the tactility, stability, and smoothness of the switch. For custom keyboards, the most common and widely compatible stem is the MX-style cross-shaped stem, but similar variants and not-so-similar others also exist.

The spring is a metal coil that sits under the stem, and is related to a switch’s actuation force -- the force needed to press down on a switch and to register a keystroke. As a hard and fast rule, heavier springs have higher actuation points. The exact actuation force required for each weight is a little more difficult to determine, as each manufacturer seems to follow their own standards.

Lubricants aim to reduce the friction between the switch’s stem and leaf/spring to create a smoother-than-default typing experience. They are completely optional, although many enthusiasts will swear by them and some switches may come pre-lubed from the factory. 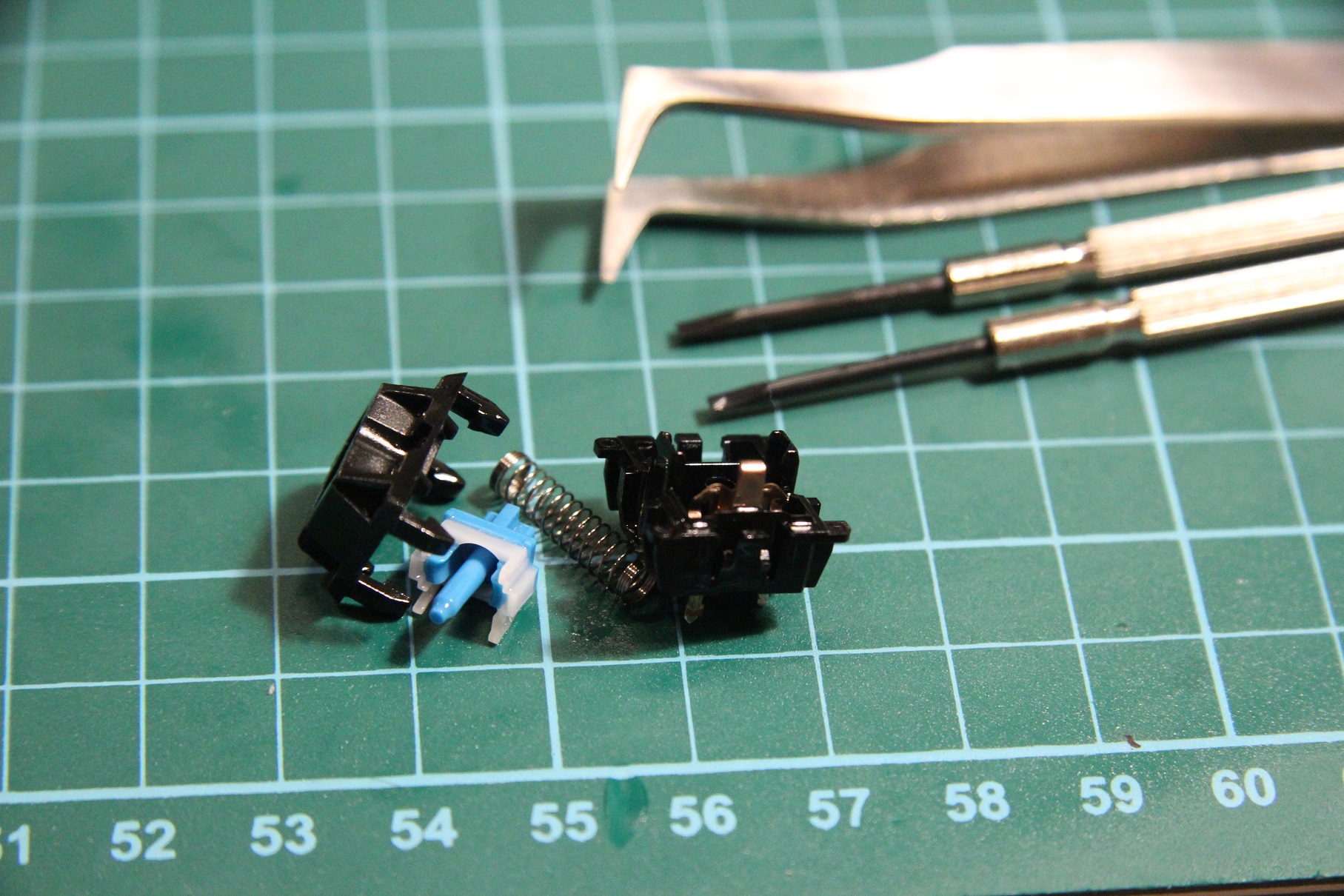 Note: Using random household liquids and cooking oils as switch lubricants is not recommended. They may gum up switches, leave sticky or rancid residue behind, attract dust and other particles, or produce other unpleasant results.

Switch films, also optional additions, aim to reduce switch wobble. They sit inside the switch, sandwiched between the switch's upper and bottom housings. The end result is a more consistent typing and acoustic experience, as well as a duller clack.

Main tools are prioritized below, followed by alternatives and optional items in indented bullet-points. The switch specifications below (contained in spoiler tags) have been described as advertised by the manufacturer, but the user’s actual experience might vary. Also, while an effort has been made to include switches that are commonly available, the list is not all-inclusive. 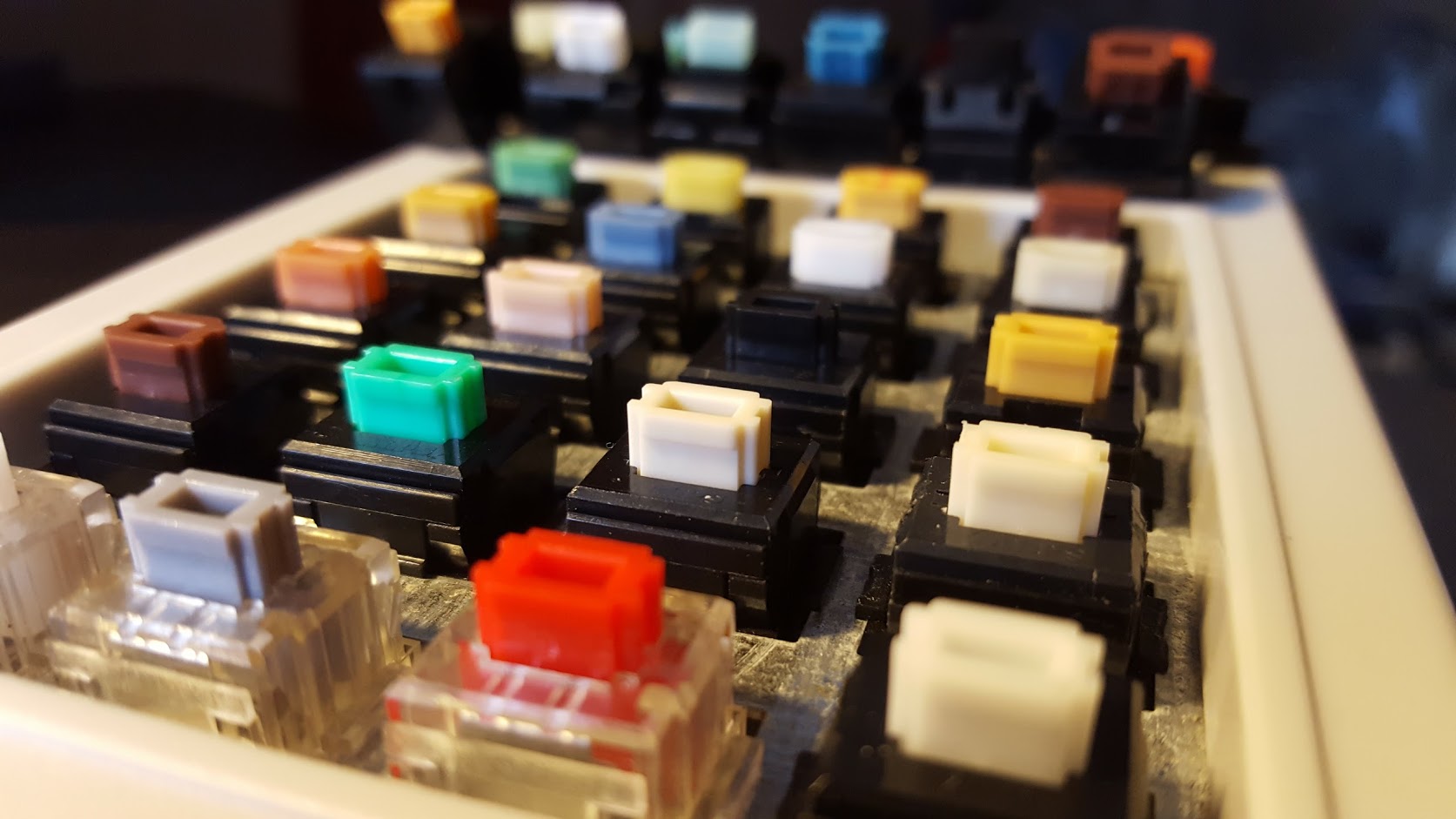 Switches with a cuboid stem. Some switches may be difficult to acquire outside of Group Buys (Section 6.0). 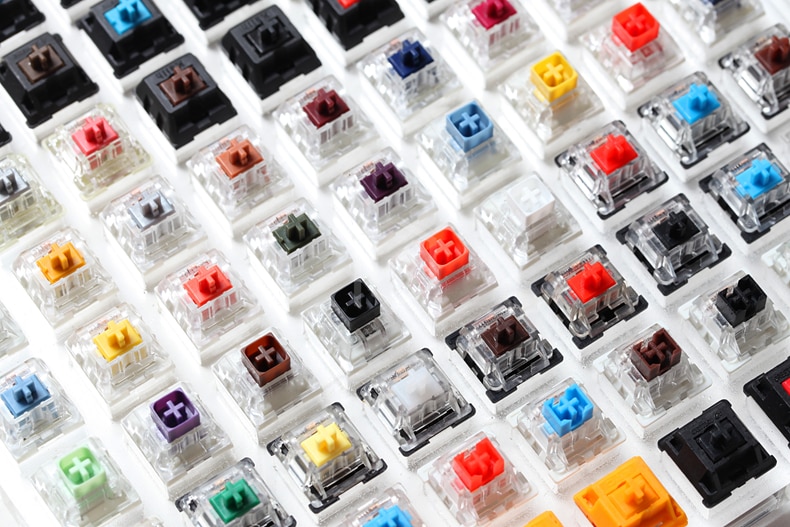 Switches with a cross-shaped stem. Some variants enclose the stem in a bracketed or boxed structure, or have hollow central poles. 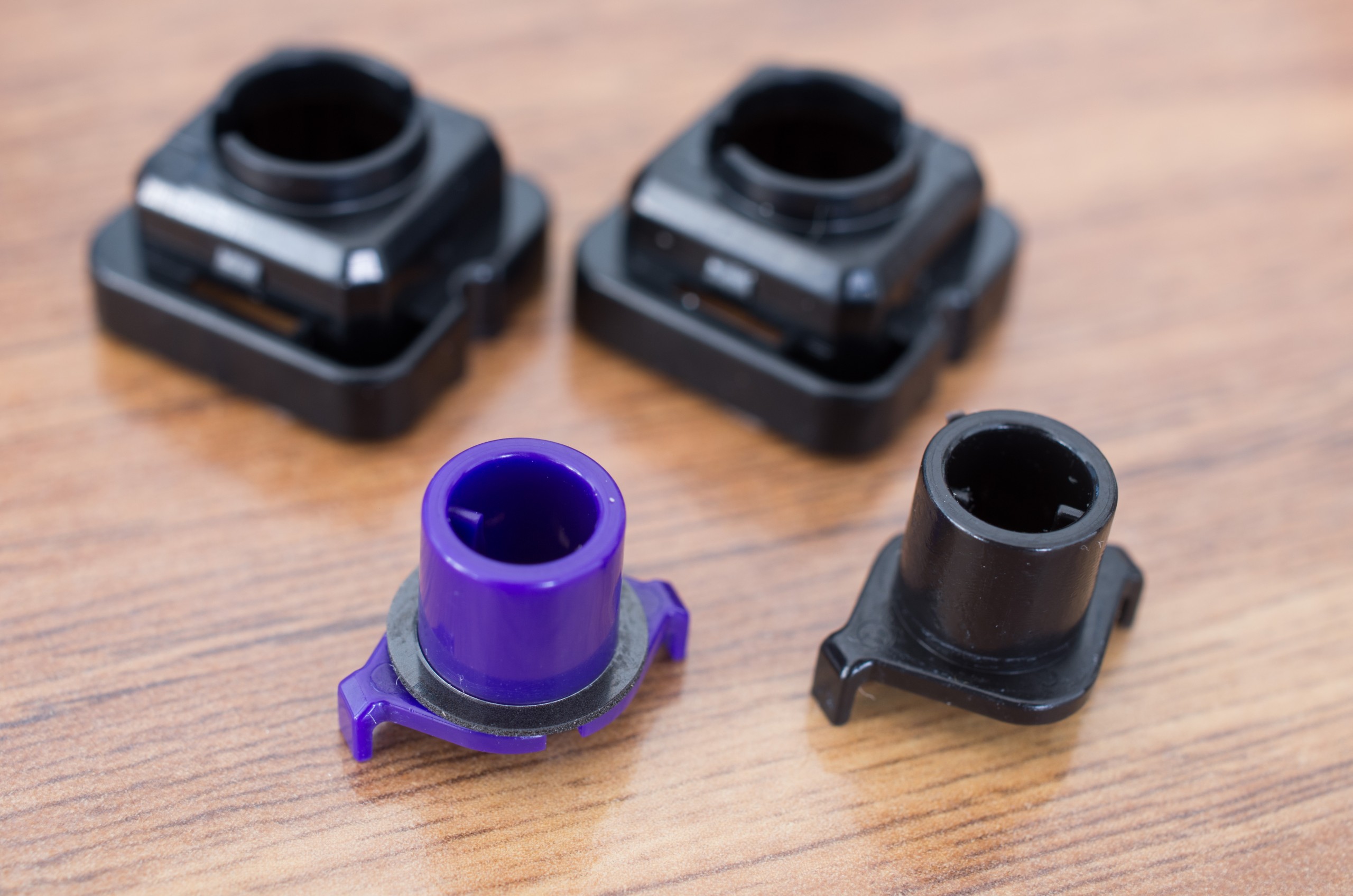 Electrocapacitive switches with a cylindrical-shaped slider that relies on rubber domes for tactility. Incompatible with mechanical keyboards. Generally not available for sale as individual switches, although replacement rubber domes may be purchased and swapped into existing Topre/NIZ EC boards.

With hundreds and thousands of options available on the market, choosing the right switch can be a daunting task for first-timers. How do you know which one is the one for you?

Here I echo the old adage: “You’ll never know unless you try.”

Head out to your local brick-and-mortar store, and test the waters out with some pre-built keyboards. That small exercise will usually help narrow down the choices between clickys, tactiles, and linears. Chances are, however, that you’ve seen a switch online that’s caught your eye, and said switch can’t be found in your local area. In that case, stoke that interest by finding out more about it. Look for reviews from others that have shared their opinions on said switch, so you know what to expect. Listen to some sound tests, and perhaps try out some switch testers to find out whether you like how it sounds and feels.

Don’t forget, the purchase isn’t the be-all and end-all of things. If your choice doesn’t live up to your expectations, there’s nothing stopping you from trying again with another set of switches.

Back to All Blogs
×